Observatory dome and telescope installation is the final step in securing the observatory, and the most labor-intensive and delicate step.  Proper installation is essential to successful functionality and use of the dome and we take great care to make sure that each piece is seamlessly installed.  Take a closer look at the installation process with the installation at the New Orlando Science Center in Orlando, Florida.

Observa Dome Laboratories designed and fabricated the 30-foot diameter dome atop the Science Center at an elevation of approximately 96 feet above the ground.  We carefully analyzed the windloadings and structural requirements of the dome and engineered a model that would be re-assembled on the ground and lifted on top of the building.  In approximately two weeks, the pre-fabricated sections were reassembled and lifted on top of the building to complete the observatory.

Take a closer look at the installation process and see a small piece of the colossal effort and careful planning required to successfully install this essential piece.  Give us a call to learn more about fabrication and installation for a new observatory in your area.

On Friday, February 2, 1996, final acceptance testing was successfully completed for a model 30.375 Observa-DOME at the New Orlando Science Center in Orlando, Florida. Below are a few photos and a brief description of the re-assembly process. You can click on any of the photos to receive the larger size. 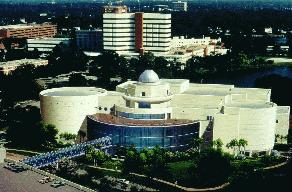 The 30 foot diameter Observa-DOME sits atop the central part of the building at an elevation of approximately 96 feet above the ground. Being an intregal part of a public building, it was necessary to demonstrate that our Observa-DOME structure will withstand all applicable windloadings as required by local and state building codes. To this end, the latest finite analysis computer modeling programs were utilized by our structural engineers, registered in the State of Florida, to provide structural calculations demonstrating the capability of this Observa-DOME. Because of the complexity of working atop an unfinished roof at this level, it was decided to re-assemble the dome on the ground adjacent to the facility and employ a crane to lift it on top of the building. 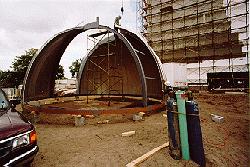 Monday, January 22, 1996, the prefabricated Observa-DOME sections arrived in a 48 foot enclosed van and were unloaded on site. Re-assembly began immediately beginning with the dome tension ring and supporting arch structure. 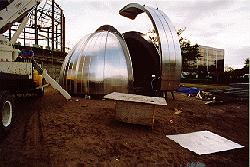 Thursday, January 25, the dome shutter sections were bolted together, lifted into place and bolted to the track mechanism. All shutter actuating mechanisms including cable, pulleys, gearmotor, limit switches and reversing relays were installed and tested. Additionally, an interior rubber shutter flashing was installed. The base angle ring sections, horizontal & vertical casters, grout, electrical power bars, and azimuth drive motors were hoisted onto an intermediate roof level. 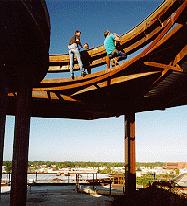 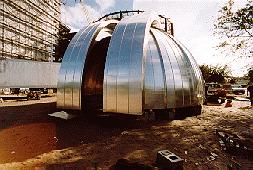 Monday, January 29, the dome was given a final washing on the ground to remove any fingerprints and dirt incurred during re-assembly.
Tuesday, Final preparations for lifting the dome atop the building were completed and an area was cleared between the dome and the building in which to assemble and place the crane early Wednesday morning. 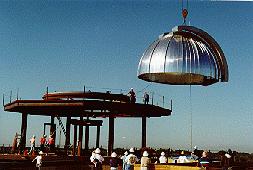 Wednesday morning, 10 am, the 30 foot diameter Observa-DOME was lifted into place 96 feet above the ground and over 100 feet from the edge of the building. A 300 ton capacity hydro crane with a 235 foot boom was used to make the lift requiring approximately 30 minutes. By the end of Thursday, all flashings, skirting and electrical components had been installed. All rotating dome functions were tested in preparation for the final acceptance testing scheduled for Friday morning.

Friday morning, February 2, 1996, all final acceptance testing was accomplished successfully and witnessed by Directors of the New Orlando Science Center, construction management, and by the project architect. Total time for Observa-DOME personnel on site: 12 days !

The installation crew from Observa-DOME would like to take this opportunity to thank Scott Niskach; Orlando Science Center, Maynard Breeden; Baker Mellon Stuart, Peck and Marsha for their help and hospitality.