Scientists are currently preparing to see some things that they have never seen before. Over the course of the last month, there have been a few major developments announced in regards to new telescopes that are set to be put into use soon. 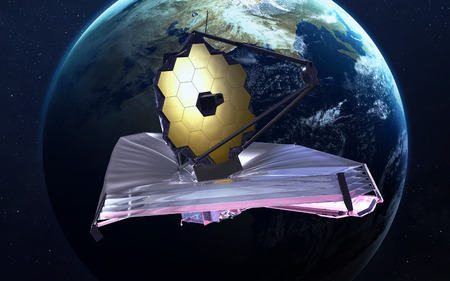 The James Webb Space Telescope has been an effort that NASA has been working on for the past few years and is nearing completion. This particular telescope is under construction at the moment, but it will soon be transported to the Goddard Space Flight Center in Maryland before eventually being sent to the Johnson Space Center in Texas for final testing. In late 2018, the telescope will then be launched into space to replace the Hubble Space Telescope.

When it is put into orbit, it will become the most powerful telescope ever put into orbit. Webb is approximately 100 times more powerful than Hubble, and Gizmodo reports it will allow researchers to look at “some of the dimmest and oldest galaxies in the universe,” which will open up the possibility of learning more about space and how it works. The article also offers some of the best views we’ve had yet of the telescope in design and construction and gives a good look at the numerous gold panels that make up the telescope’s primary mirror.

The second telescope is the Event Horizon Telescope, which is in fact not a single telescope but a network of eight different observatories located in six locations around the globe. This telescope is going to be used to create a virtual Earth-sized telescope, according to ScienceBlog. With the combined viewing capabilities of the different facilities, this virtual telescope is expected to be so powerful that it could find a nickel sitting on the moon’s surface.

Scientists are hopeful that this high resolution will make it possible to create an image of a black hole for the first time in history. In the earliest tests, so much data was captured that it couldn’t be electronically transmitted. Instead, more than 1,000 hard drives had to be physically transported to data centers for processing. This would obviously be an exciting development for science and open up many new possibilities when it comes to space exploration.

While all of that is going on, there are also telescopes in backyards, at schools and colleges and elsewhere around the world that are offering some pretty amazing views. If you’re in need of a observation dome to protect your stargazing equipment, look no further than Observa Dome Laboratories. We offer observation domes that are pushing the boundaries of technology and design, offering computer-controlled automation capabilities, protection from the elements and much more. Available in private, amateur sizes on up through professional research-caliber facilities, we do it all at Observa Dome.

To learn more about our observation domes or to discuss your needs with us, call Observa Dome today at 601-982-3333.