By now you’ve probably heard of NASA’s discovery last month of seven new planets – exoplanets – orbiting a star called TRAPPIST-1. Exoplanets, or planets that orbit stars outside of our solar system, are hard to detect – especially when you consider the vast span of light years between the Earth and these other suns. So how do we find exoplanets? 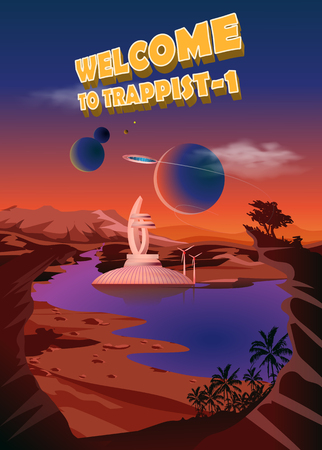 Our technology is limited at the moment, so we cannot send a spacecraft, but there are two ways that scientists can discover these planets. The first is called radial velocity. Planets are impacted by the massive gravity of a star, but the planets, too, affect the sun in turn. As Paste Magazine discusses, the planet acts upon the star, causing it to slightly vary in its position. The larger the planet is, the greater the shift and the greater “wobble” that can be detected from the star.

Radial velocity can also tell us the mass of the planet. The majority of planets discovered are around Jupiter’s size – because of their larger mass, they more significantly impact the star’s wobble which makes them much easier to find than Earth-sized or even Pluto-sized planets. Radial velocity can also help us determine whether or not a planet has the potential to hold life. For example, if the planet’s orbit is too close to the star, it will boil any water away. If the planet is in the habitable zone of a star, however, it has potential to be suitable for life to form.

The second method of detecting exoplanets is called the transit method. This method is more commonly used and is simple to understand. When something moves in front of a star, passing between us and the star, the light we see from the star diminishes. If this occurs on a regular schedule, it means that there is something orbiting the star.

Think of it in the same way as a partial solar eclipse here on Earth. When the moon passes between us and the sun, the light is blocked – at least partially. That’s exactly what scientists observe using the transit method.

Scientists have also been relying on another way to learn more about these exoplanets. Astronomers can look at the amount of light that bounces off a planet and identify what type of material it is made from using spectroscopy. Spectroscopy analyzes the wavelengths of light coming from the planet and analyzes it, comparing the emitted spectrum to the known spectrums of elements here. This allows scientists to more accurately identify each discovered planet and determine whether it’s a gaseous body or a rocky planetary body.

While these exoplanets are roughly 40 light years away, this is still an impressive discovery, and only the latest in a line of exoplanet discoveries in recent years. The hunt for new planets is expected to get a big boost next year when NASA launches its new satellite, TESS – the Transiting Exoplanet Survey Satellite – in March 2018. TESS will use the transit method to look at more than 200,000 stars in search of signs of other exoplanets, and other space-based telescopes can then turn to study suspected stars for more concrete signs of planets.

Speaking of telescopes, some of these systems – although not the planets – can be viewed right here from Earth. TRAPPIST-1 is a very dim star, making it very difficult to see, as The Baltimore Sun reports, but many other stars and our neighboring planets can be observed with the use of even a small ground telescope. At Observa Dome Laboratories, we work to provide telescope shelters and observatory domes to help protect the sensitive equipment used to detect and observe stars and other planetary bodies. Find the structure you need today – whether for your home telescope or a professional observatory – by giving us a call at 601-982-3333 or take a look at some of our recent projects online now.

← That’s No Moon – Oh, Wait, Yes it Is!
Martian Roundup: What’s Happening on the Red Planet? →